Built for the Admiralty in 1945, Brent was launched too late for the War effort and was sold on instead to the Port of London Authority. Used to help maintain the Thames as a navigable waterway and to tow lighters and barges full of cargo between ships and warehouses in London Docks, she was retired in 1970, the last PLA steam vessel left in service.

She is being restored by the Steam Tug Brent Trust 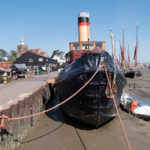